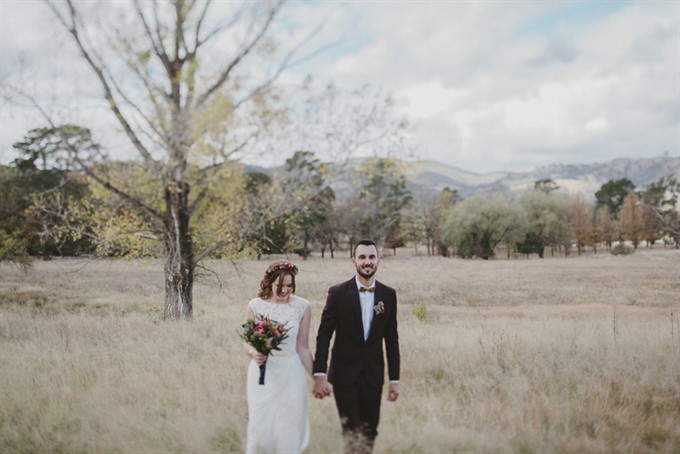 Beth and Sean met at church. They discovered they had friends in common even though he had spent most of his life in Dubai. One day after church Sean awkwardly asked for Beth's phone number and then eventually gathered the courage to ask her on a date. As he is an IT Security Administrator and Beth is a clinical psychologist, their different personalities complement each other perfectly. 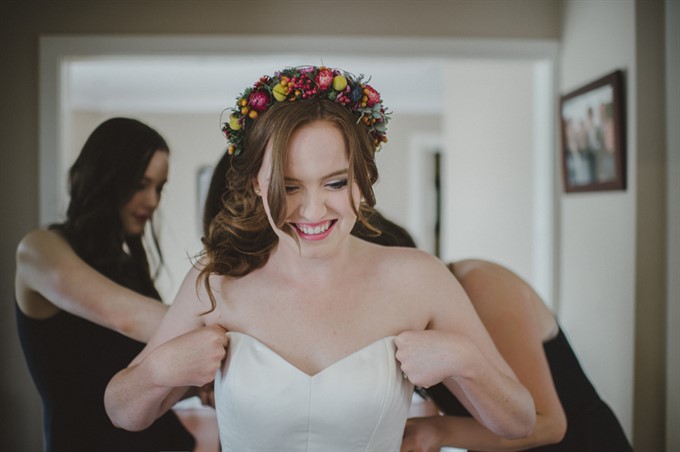 The proposal was a total surprise for Beth. Sean showed up to her work with a coffee, a rose and a note that told her she was about to have a week of date nights, each one with a different theme. After a preplanned dinner with her mum, Beth was to meet Sean in formal attire. They arrived at the Botanic gardens where Beth's mum handed her a note and left her to follow a path lit up by lanterns. She came across a sign pointing to the rainforest where trees were lit up with festoon lights. Beth got to the deck at the bottom where a vintage record player was playing a message from Sean. He came up behind her on one knee and asked her to marry him! Sean had invited both families and best friends into the gardens where they watched the whole thing on an upper deck. He even had the entire proposal filmed by their friend so they could remember it forever! 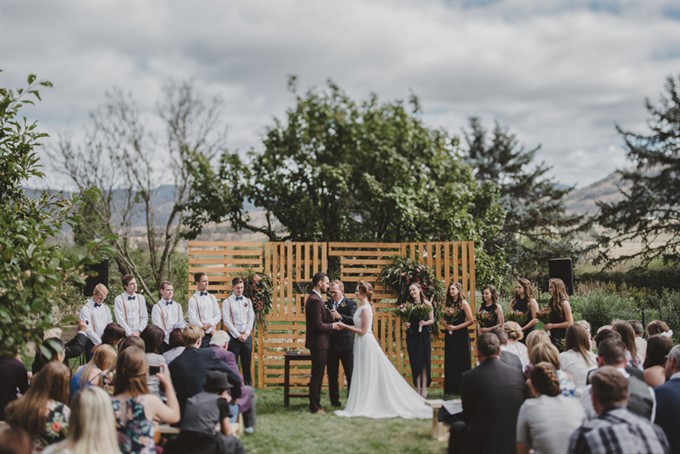 The couple opted for an outdoor ceremony and reception at the beautiful Lanyon homestead which is located 40 minutes from Canberra. Beth’s father spotted the location, and after a few visits, they knew that it was the perfect venue for their big day.

The ceremony was their favourite part of the day. Sean was overwhelmed when Beth started walking down the aisle in her wedding gown. “It’s one of three times in my life that I can ever remember tearing up”, he said. Beth’s favourite moment was when they were signing the registry and had just promised to love each other unconditionally. “Then our friends surprised us with a song written for us, and it was like a wave of love just hit me”, she remembers. 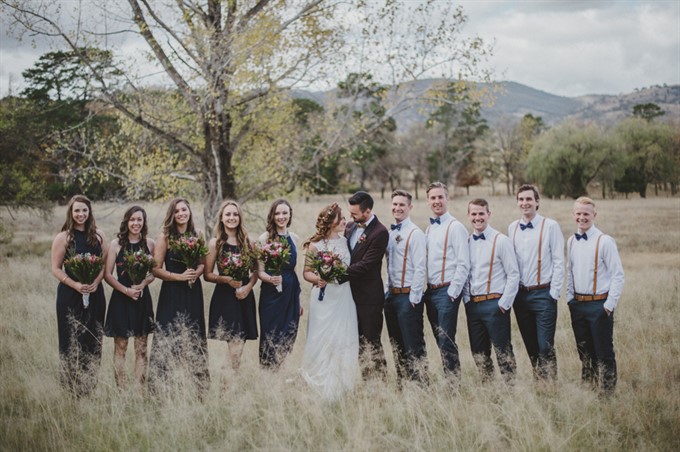 Beth wore a romantic sleeveless wedding gown by Karen Wills Holmes and accessorised it with a lush floral crown created by Laurel and Lace which perfectly complemented her and the bridesmaids bouquets. Sean looked dapper in a maroon suit with black lapels while the bridesmaids sported navy dresses which were customised to suit their figures. 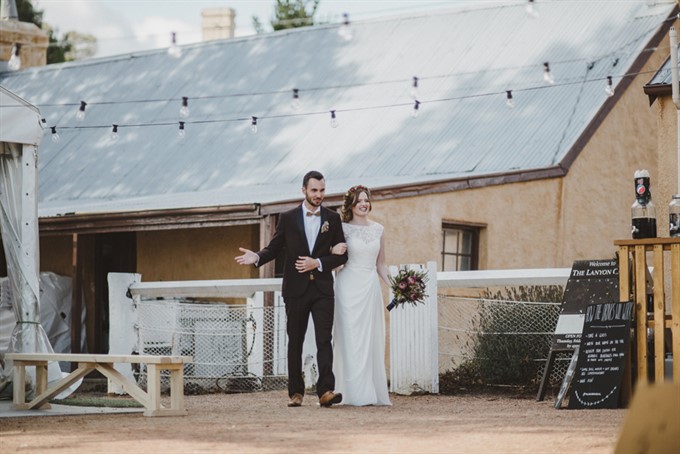 Their wedding theme was inspired by the venue itself. Beth describes it as “woodsy, natural, white, Australian landscapes and little touches of gold”. To decorate the venue, they picked things they both loved and in the end everything came together. “Ultimately, I wanted to be able to reflect the outdoors in everything we did – from the wooden trestle tables and benches to the native flower arrangements”, she explained. There were a lot of natural elements such as wood, foliage and native Australian blooms while the colour palette included white, gold, navy and maroon.

We wanted it to be beautiful, but laid back, and for people to just enjoy the celebration with us. That’s also why we didn’t have a seating arrangement – we wanted people to walk around, be relaxed and feel a good vibe. 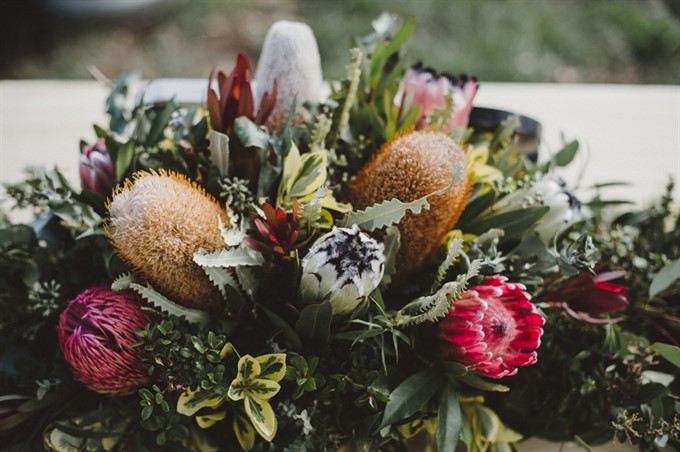 The key design feature at the reception were the centrepieces made from Australian natives by the bridal party the day before the wedding and looked stunning against the wooden furniture. There were a lot of flamboyant protea blooms which were a nod to their South African roots. The bridesmaids spent a lot of time creating floral arrangements completely from scratch. They had everyone helping out, from Beth’s brother’s girlfriend through to her nana. Some of the girls even spent the morning picking the foliage from friends’ gardens. “It was a lot of work, but we were totally in love with the final result”, said Beth. 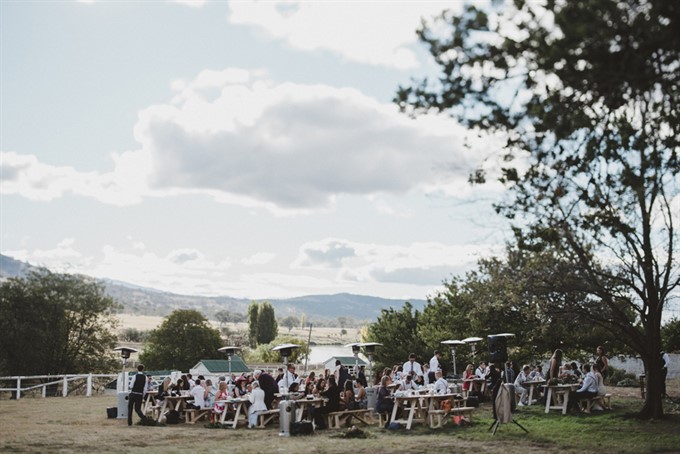 The tables and benches were made by Sean and his groomsmen. “It started as a crazy idea I got when we were looking at venues”, said Sean. Since outdoor venues wouldn’t allow them to use individual chairs, they had to be creative. They found the perfect bench design on Pinterest, and one of their carpenter friends made a trestle table. Their other DIY projects included hand-made coffee mugs which they gave away to their guests as a bomboniere, chalkboard signs, the labels on mason drinking jars and love quotes stamped on wooden offcuts that sat next to the floral centrepieces. Festoon lights created romantic ambience as the sun set in the evening. 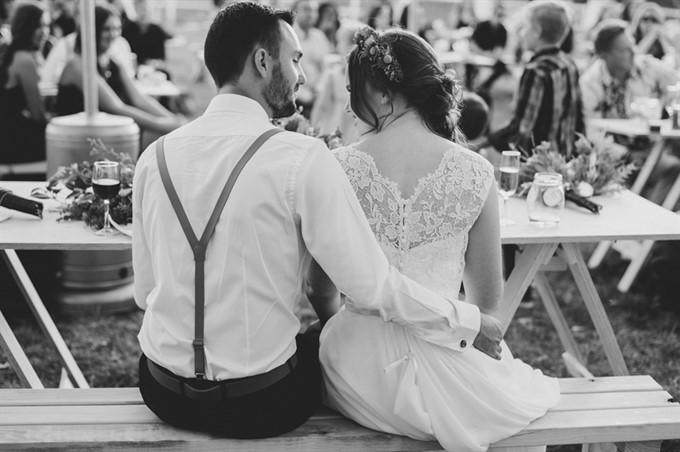 Another special element of Beth and Sean’s big day was their amazing wedding photography by Lauren Campbell. The images perfectly captured the atmosphere of the day and the couple had so many favourite images that they couldn’t decide which ones to have around the house!