How Celebrities Do Their Hen’s Parties

From glam parties to intimate dinners, celebrities really know how to have fun, so be inspired by these fabulous hen’s and buck’s night ideas! 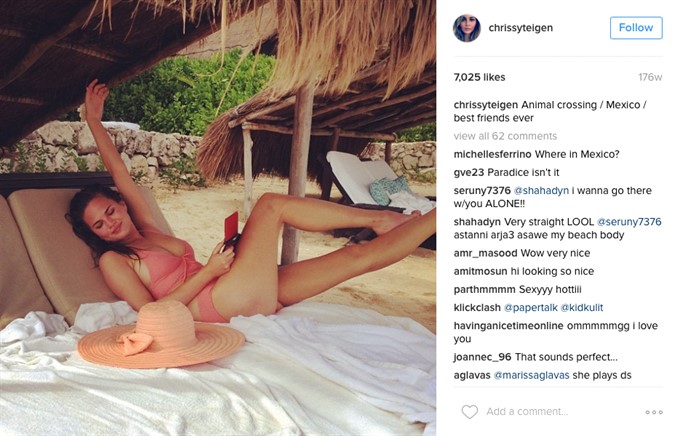 If you are not in the mood for partying hard, then you will love Chrissy Teigen’s idea of a perfect hen’s night! She has spent a relaxed weekend in Mexico with her friends and replaced a late night party with afternoon tequila tasting and beach fun. It was the perfect interlude for her Lake Como wedding with John Legend in September 2013. 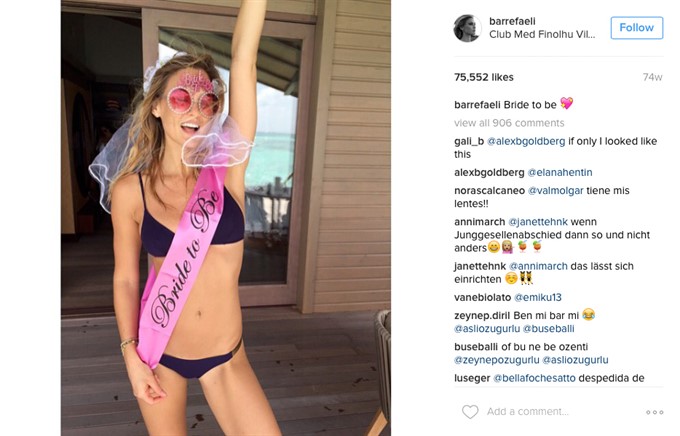 Maldives are not just for honeymooners! Supermodel Bar Refaeli has proved that it is an ideal spot for a hen’s night. She has spent a weekend with her friends at one of the most luxurious beach resorts in the Maldives before her traditional Jewish wedding with Adi Ezdra in Israel in September 2015. It must be the key to that bridal glow on her big day!

Margot Robbie’s master class of pastry on the Gold Coast 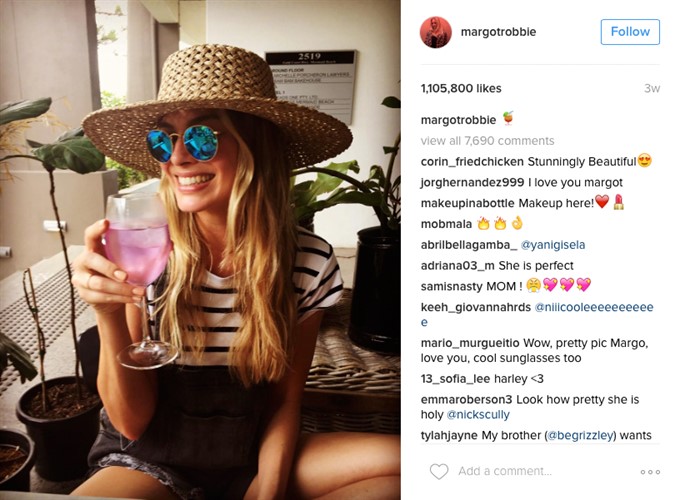 Fancy an intimate party at a bakery? Margot Robbie had a fun-filled weekend on the Gold Coast with five of her best friends before her low-key Byron Bay wedding with Tom Ackerley in December 2016. The hen’s party kicked off with a master class of pastry. The girls hand-made their doughnuts and sipped purple gin and tonic made with New South Wales’ floral infused Ink Gin which instantly became one of the trendiest drinks on the Gold Coast. 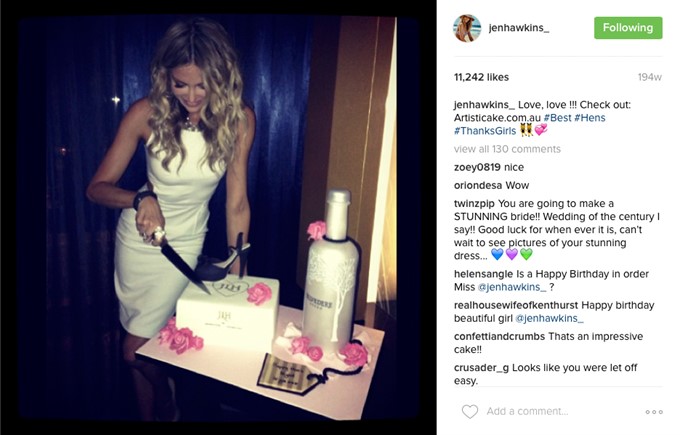 Like the idea of a night out on the town followed by a relaxing day at the sap? Australian sweetheart Jennifer Hawkins celebrated her bachelorette weekend with a group of 10 close relatives and girlfriends. Her hens weekend began with a gourmet feed at Sokyo on the Friday night then a night at the five-star Darling hotel at The Star. The Saturday night saw Jen and her best gal pals partying at Marquee nightclub at The Star which included a personalised cake and French Champagne followed by a day of pampering and relaxation. 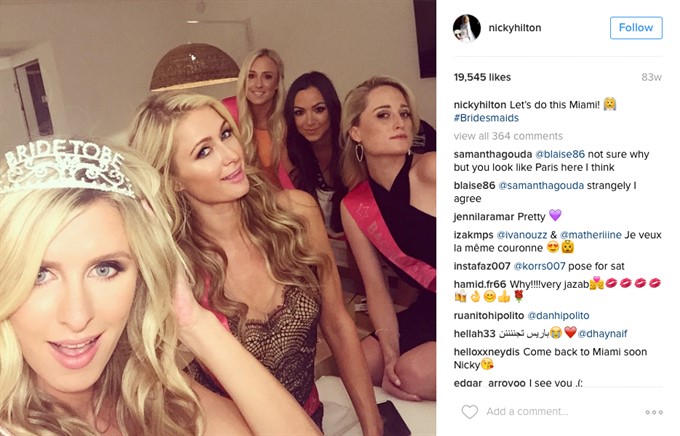 With its glorious beaches, swanky hotels and glitzy night clubs Miami is one of the favourite celebrity hen’s night destinations in the USA. The hotel heiress Nicky Hilton, who married banking heir James Rothschild in July 2015 has spent a hen’s weekend with her sister Paris and a bunch of friends in a luxury beach hotel. 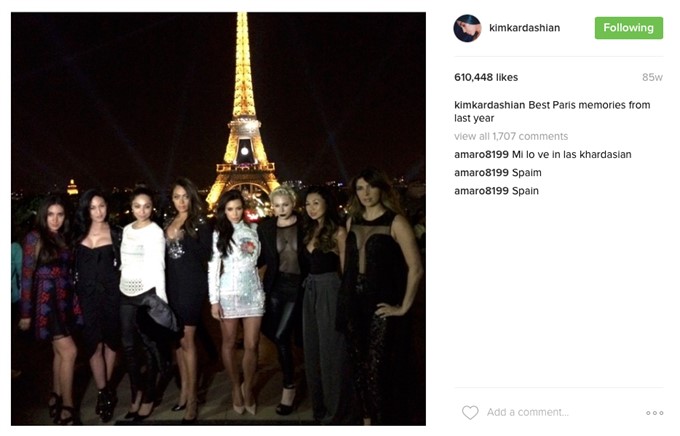 Just a few days before marrying Kanye West in May 2014, Kim Kardashian got all her best girlfriends together for a glamorous night in Paris. The City of Love hosted all the Kardashian’s and their friends for an evening under the Eiffel Tower and a walk outside the Louvre Museum. They then travelled straight from France to Italy for a celebration in the hills of Florence. 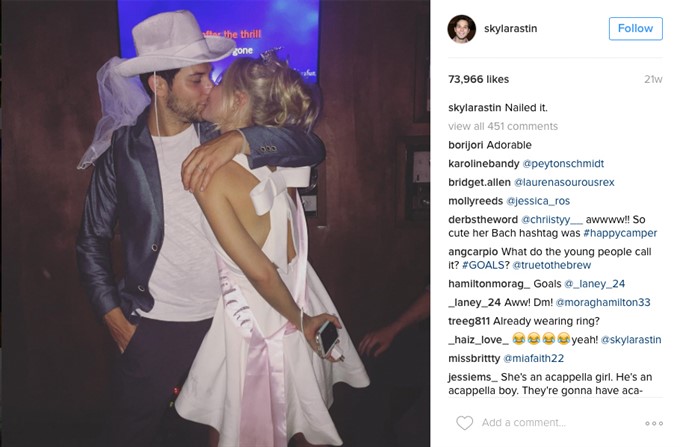 If you hate separating even for one night, why not have a joint party! Actors Anna Camp and Skylar Astin danced the night away together at their cowboy-themed party in California, even though the two groups started the day’s festivities separately. The couple hosted an outdoor wedding ceremony on the California coast in September 2016. 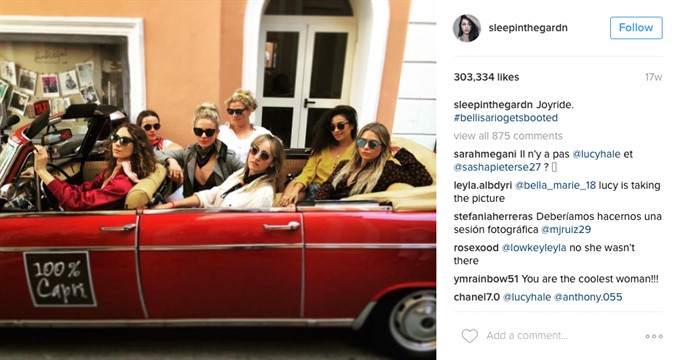 Fancy a European adventure for the ultimate hen’s party? Pretty Little Liars star Troian Bellisario had by far the best hen's party back in September 2016. Her squad, including co-stars Ashley Benson and Shay Mitchell, all hopped on a plane and flew to Italy. The adventure included flowers crowns, matching t-shirts, lots of pasta, and of course sight seeing. Her friends posted happy snaps on Instagram using her hashtag, #bellisariogetsbooted.