From dresses to hair and make-up styles, you'll find some inspiration from these gorgeous celebrity bridesmaids! 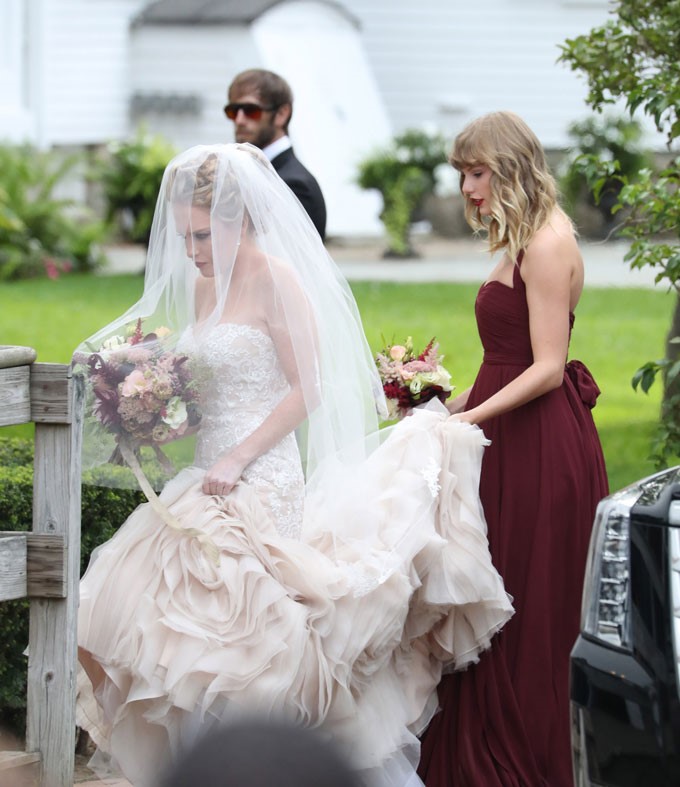 If you want a bold colour for your bridesmaids, consider a deep maroon shade worn by Taylor Swift at her childhood friend’s Abigail Anderson’s wedding. The dress featured a classic sweetheart neckline and a cascading A-line skirt, Taylor paired the outfit with a lipstick in the same shade. 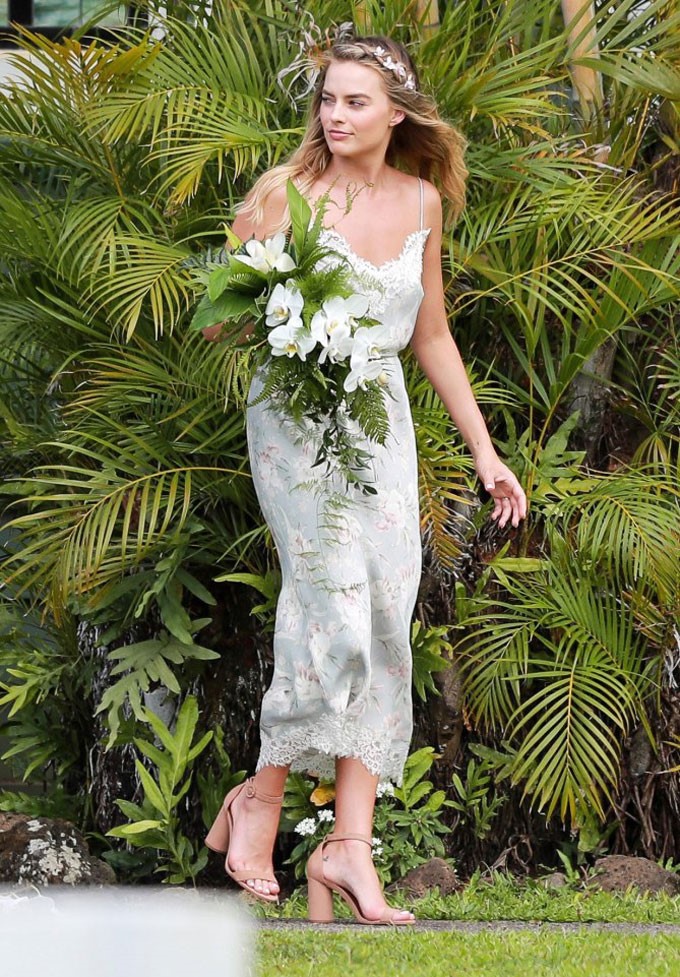 Planning a wedding on a tropical island? Get inspired by Margot Robbie’s floral bridesmaid dress she wore at her friend Julia Koenig’s wedding in Kauai, Hawaii. Margot wore a pale green satin slip dress that featured pastel pink floral print and lace detailing and styled it with nude sandals and a floral crown. 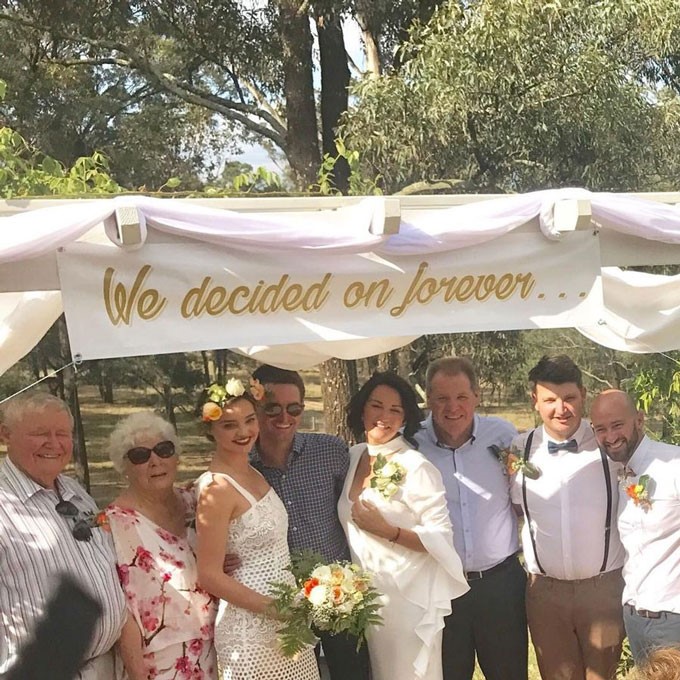 Supermodel Miranda Kerr was a bridesmaid at her brother's wedding in December 2016 in Hunter Valley, Australia. She wore a chic, bohemian-style lace dress in white which was styled with a flower crown and a matching bouquet. 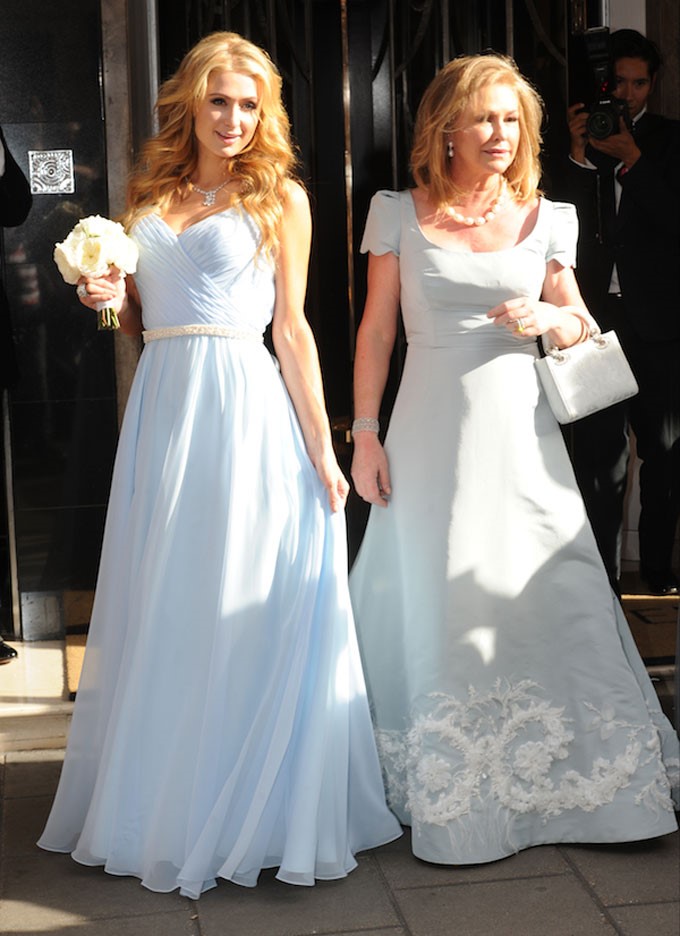 The hotel heiress Paris Hilton was her sister’s bridesmaid and wore a beautiful powdery blue gown by Dennis Basso. The dress was styled with a bouquet of white blooms and was coordinated with mom Kathy’s mother of the bride outfit. Nicky Hilton and James Rothschild hosted their wedding at the Orangery of Kensington Palace in London in July 2015 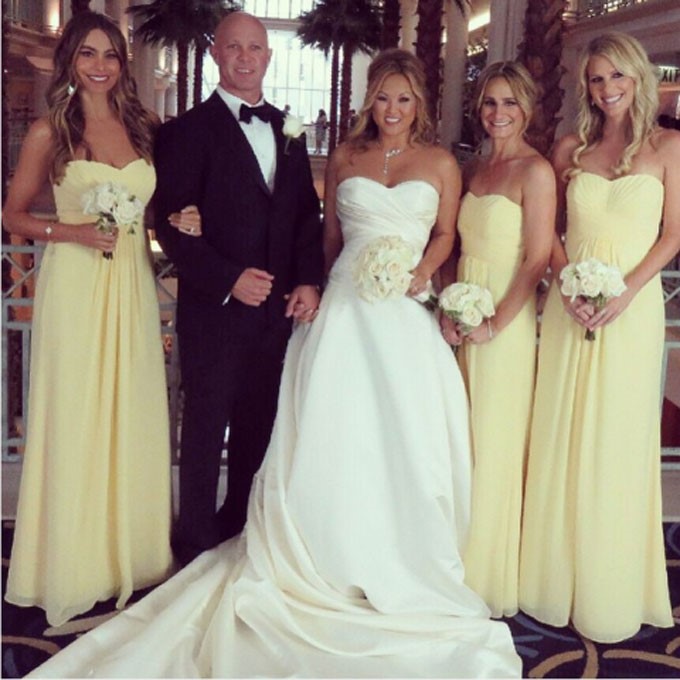 Actress Sofia Vergara was one of the bridesmaids at her friend Chi's wedding in June 2015. The bride wore a strapless white gown with a sweetheart neckline and the bridesmaid dresses featured the same silhouette but the colour was buttercup yellow. 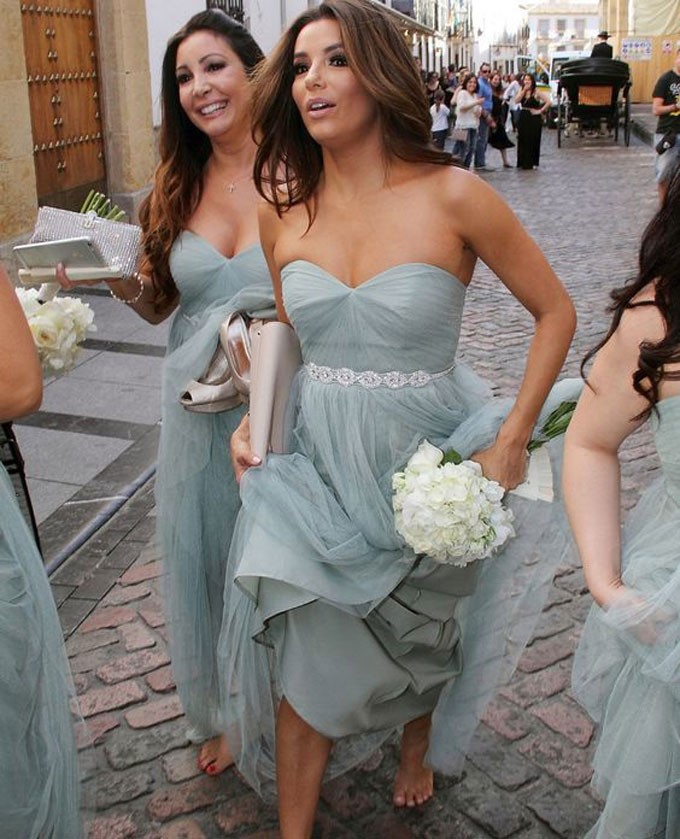 Eva Longoria’s friend Alina Peralta hosted her wedding in Cordoba, Spain and the bridesmaids wore strapless mint green tulle gowns with bejeweled sashes and silver sandals to match. The girls drew the attention of the locals when they took their heels off and walked the cobblestone streets barefoot. 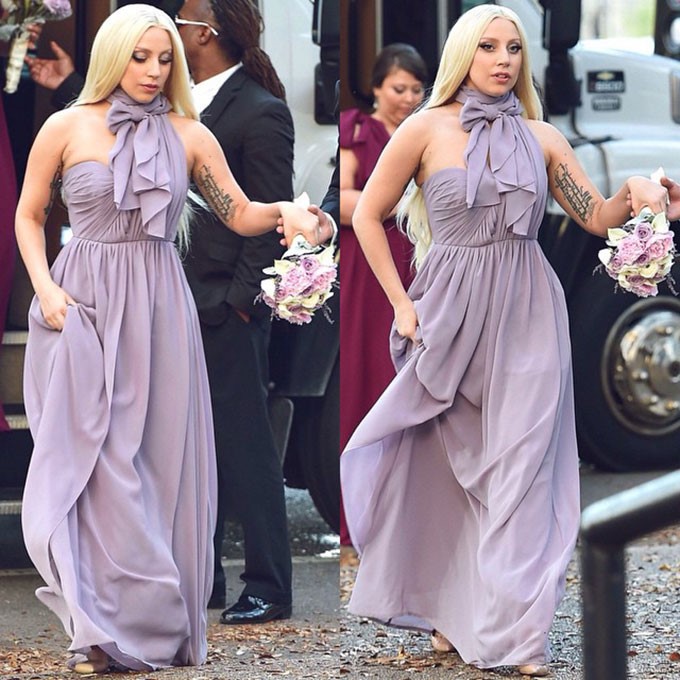 Lady Gaga was a bridesmaid at her best friend's wedding in New Orleans in March 2015. She wore a chiffon dress in a soft lavender shade and accessorised it with a 15-kt heart-shaped engagement ring, which she got from Taylor Kinney. 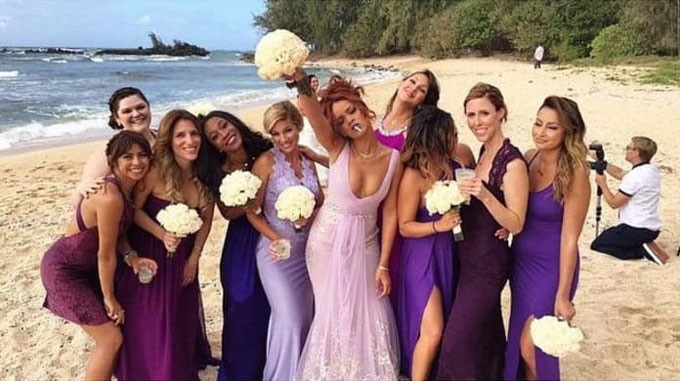 One of the most stylish celebrity bridesmaid photos was the one featuring Rihanna in a lilac Badgley Mischka gown on a beach. It was her assistant Jennifer Morales’s wedding in 2015, and all of the bridesmaids were wearing a different shade of purple. 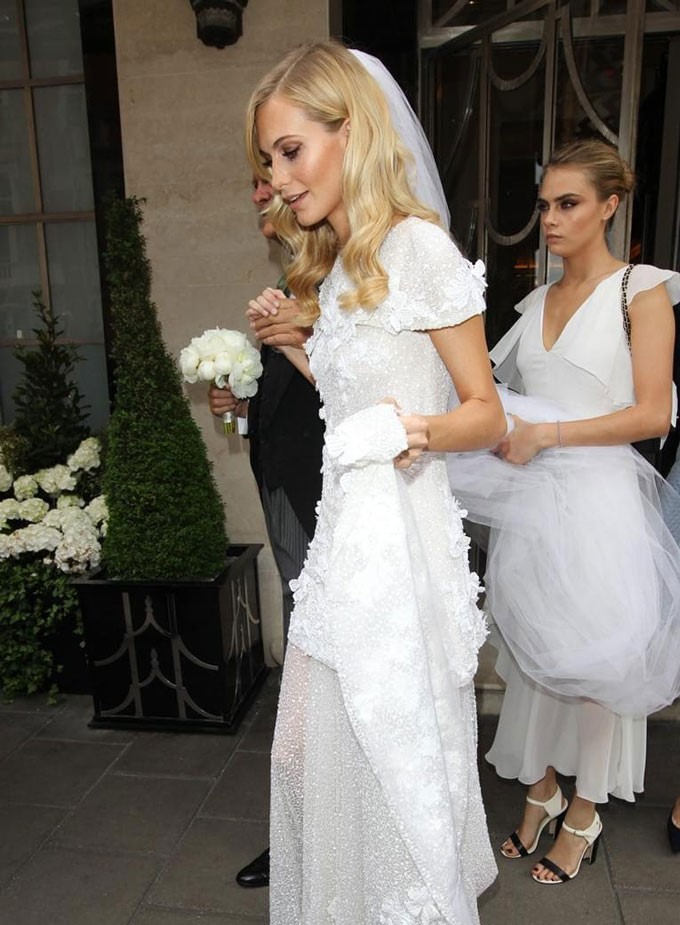 Dressed in a white Chanel dress, Cara Delevingne was a bridesmaid at her sister Poppy’s wedding in 2014. It was an elegant city wedding in Knightsbridge, London, and the bride allegedly had 17 bridesmaids. 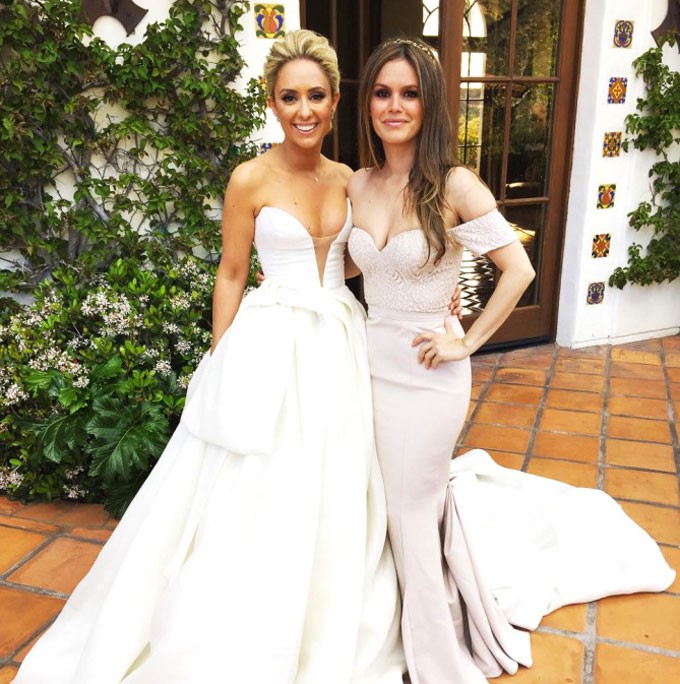 Just like in the movie 27 Dresses, Rachel Bilson has been a bridesmaid many times in her life but never tied the knot herself. For her brother’s wedding in 2016, she wore a breath-taking off-the-shoulder mermaid gown in blush pink styled with a buckled wool cape. 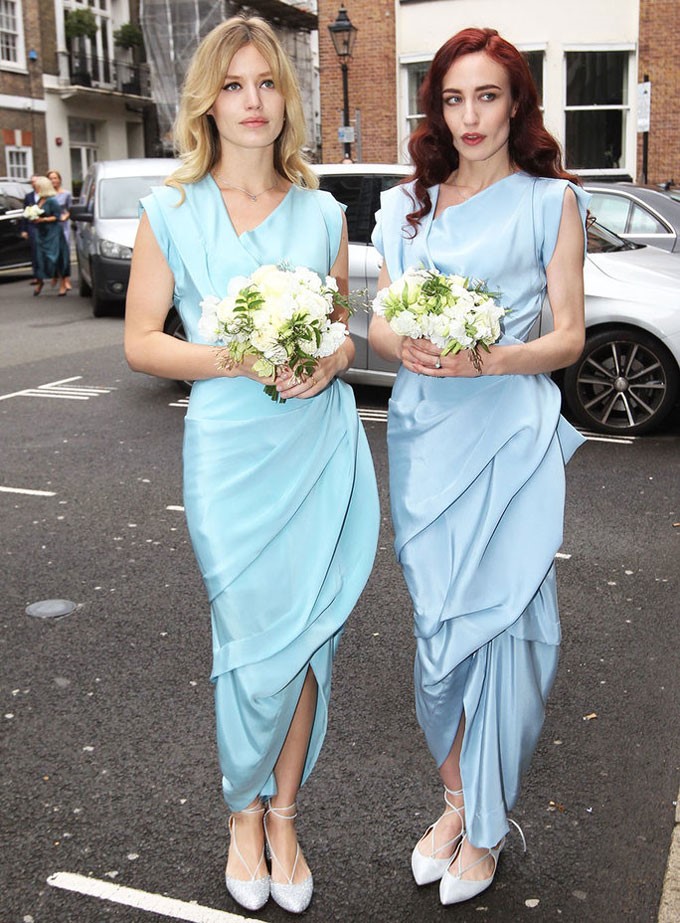 For their mom, Jerry Hall’s wedding in London, Georgia May Jagger and her sister Elizabeth wore structured blue bridesmaid gowns by Vivienne Westwood. The dresses were in two different shades of blue and featured elegant draped details. 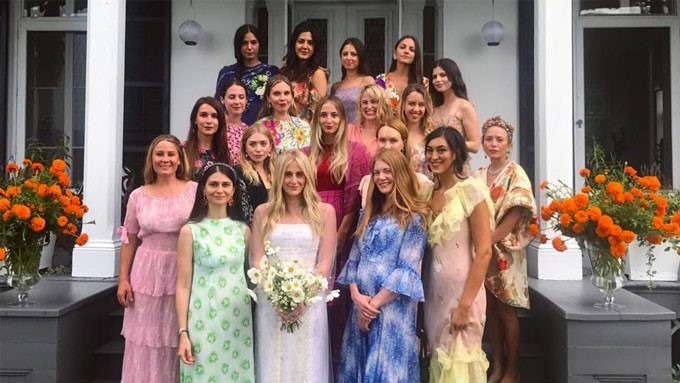 And if you are a fan of floral bridesmaid dresses, you will love Mary-Kate Olsen’s voluminous and colourful kimono-style gown which she wore at Cassie Coane and Jim Koenig’s wedding in New York. The bride told her bridesmaids to wear something floral and the result was a stunningly vibrant mismatched display. 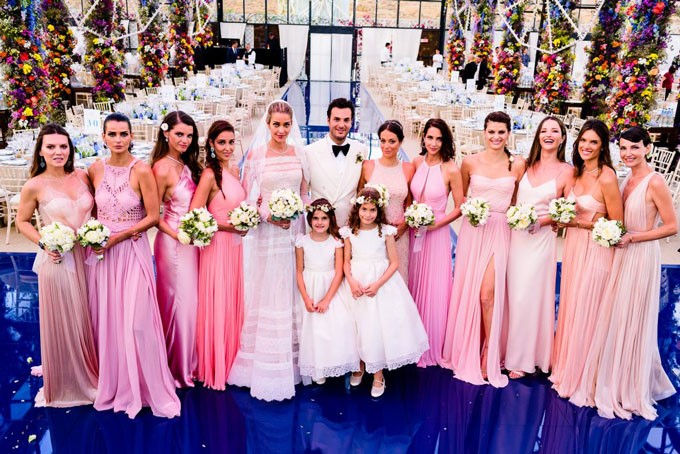 The combination of peach and pink shades is another beautiful wedding colour palette, and it inspired Ana Beatriz Barros whose bridesmaids included supermodels Alessandra Ambrosio and Isabeli Fontana. She tied the knot in Greece, and the dresses were sexy and lightweight with slits at the front. 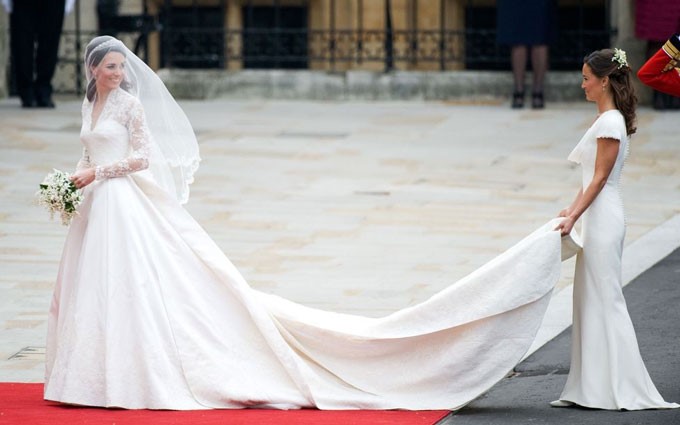 The most famous all-in-white bridesmaid outfit of all times is definitely Pippa Middelton’s Alexander McQueen gown. She wore it at the royal wedding of Kate Middleton and Prince William in April 2011, and the style perfectly complemented bride’s elaborate gown created by the same designer. 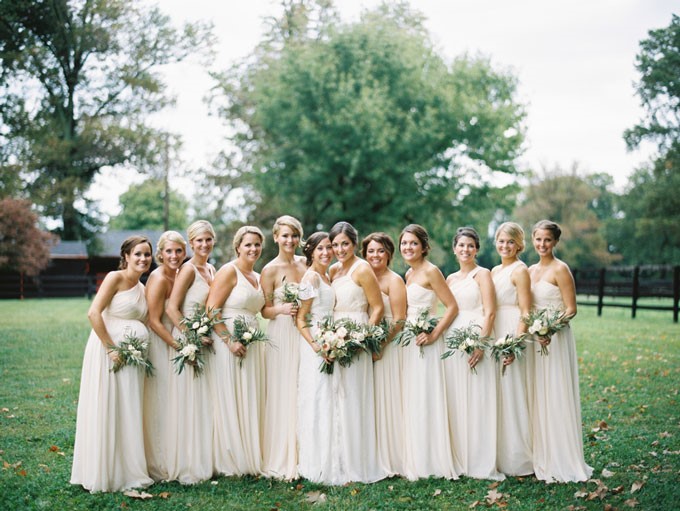 Jennifer Lawrence looked stunning at her brother’s wedding in August 2014. The bride was wearing a romantic white dress with vintage lace detailing, while the bridesmaids sported dresses in creamy ivory. The dresses were selected to complement each of the bridesmaids and styles ranged from strapless to one-shoulder and bateau neckline. 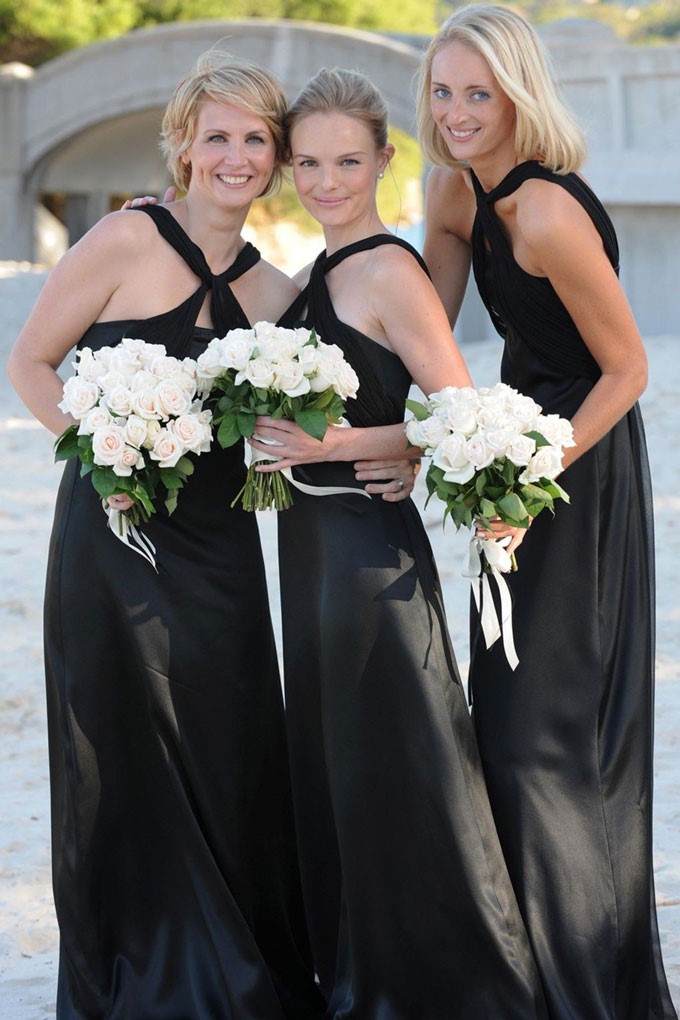 Would you choose black dresses for your bridesmaids? It is an elegant choice for an evening wedding, and we love how Kate Bosworth sported it at her friend's 2008 nuptials in Sydney. The dress was very simple but looked stunning with white rose bouquets tied with white ribbons. 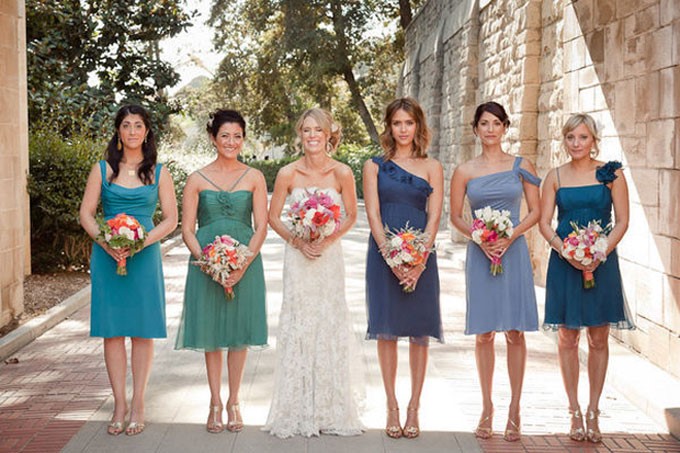 Royal blue is another popular bridesmaid dress colour and nobody sported it better than Jessica Alba at her friend's wedding in Beverly Hills. It was a one-shouldered below-the-knee dress styled with a colourful bouquet and jeweled sandals in gold.

The Most Iconic Wedding Dresses Of All Time